When RTI was first introduced, if an FPS was received late (up to 3 days), HMRC would not issue a penalty. But times are changing. From April 2018 any late submission could incur a penalty. This will be automatic. If you feel you have a reasonable excuse, you then have to appeal. An FPS should be sent when your employees are paid (the day the money goes into their accounts) or before. This totally inflexible approach by HMRC is not in the least bit helpful to businesses, especially small businesses. But as usual we're stuck with it. So we strongly recommend you process your payroll as early as possible, and send the FPS preferably at least a week before your employees are actually paid. In case there are any issues. Please be aware, if there are software issues, it can sometimes take a week or more to get a support response from Adminsoft, even though an RTI issue would get priority. So always leave yourself plenty of time. Further information on late submissions is available from HMRC's website.

This is an issue that causes some employers running a calendar monthly payroll a problem. Technically, employees must be paid (as in actually receive the money in their bank accounts) on or before the 5th of each month to count as being paid in that tax period. On the 6th or later, they are classed as being paid in the following period. What this means is that if you pay monthly, bi-monthly, or quarterly, you need to make sure your employees receive their money on or before the 5th of every month. The problem is because of weekends and bank holidays, it's quite usual for the actual pay dates to vary a bit. So for example, if one month your employees receive their money on the 4th May for the month of April, and then the next month it's on the 7th June for the month of May, technically they have not been paid for May at all, as the 7th June payment would fall into the next tax pay period (you'd have to send an EPS for May saying no one was paid). Previously, I think HMRC have tolerated this to some degree, but with RTI there's no flexibility at all. If no submission was made for May, HMRC could impose a penalty. More information from HMRC is available on this issue here It's important not to let your payroll payment date 'float' around, and ensure your employees receive their pay on or before the 5th of each month.

If you're using RTI for the first time, you will need a Government Gateway user ID and password, which you may have any way. This is the same user ID and password you would use to enter information into HMRC's web site such as VAT returns, EC Sales List, Intrastat, etc. See below for a detailed explanation of the process.

If you encounter any problems making RTI submissions, please email support@adminsoftware.biz as soon as possible. Any RTI related issues will be given priority. But please be aware, occasionally it can take a week or more to receive a response. So always submit your FPS early.

RTI (Real Time Information) has been introduced for all business in the UK. What this means in practical terms, is that each time you run the payroll, you will have to instruct the payroll software to send the details of that pay run over the internet to HMRC.

If you employ 9 people or less, you don't need to use a payroll system that has RTI because each time you run your payroll, you can login to HMRC's web site and enter the details manually. In much the same way as you may enter your VAT quarter end details now (except RTI requires a lot more information). Alternatively, you can use RTI that's built into a payroll if you wish. Certainly, it will be more convenient than having to spend time logging into HMRC's web site and entering the figures manually. If you have 10 or more employees, then you have no choice but to use an RTI enabled payroll.

You may have heard that RTI is linked to BACS payments in some way. The answer to this is yes and no! Most small businesses pay their employees in cash, cheque, or more usually these days via an on-line payment facility provided by their bank. In which case, you don't need to worry about the link between RTI and BACS. However, if you pay your employees by BACS using BACS software on your PC or network, and you have a BACS Service User Number, then you have a problem. HMRC will require you to place a cross reference (a hash code) in each BACS record that relates to each employee record in the XML file that will be sent to HMRC via your payroll. While Adminsoft Accounts supports RTI, it does not currently produce output suitable for BACS transmission, and so does not support this cross referencing. As most small businesses use an on-line payment facility provided by their bank, this is not an issue.

As far as I know, Adminsoft Accounts will be the ONLY free payroll available to businesses with over 9 employees!

One word of caution, HMRC are VERY particular about how data is presented to them, and what that data contains. Everything is checked as soon as it's sent, and if there's anything at all they don't like, the whole lot is rejected. This is made worse by HMRC's error messages which are often vague, and frequently misleading. As HMRC change their requirements from tie to time, and particularly at the start of each tax year, it's very important you keep your software right up to date.

The payroll information is submitted to HMRC over the internet in the form of XML documents. There are several types of document, depending on what's being communicated to HMRC. Adminsoft Accounts can send four types of document:

Adminsoft Accounts has an RTI test mode. So when you look at using RTI for the first time, you might want to set it to test mode (this is done in the RTI setup option, and is the default mode). This allows you to send any document you wish to HMRC, and once received and checked over by HMRC, they will then discard it. It's a good way of getting a feel for the system before using it for real. It'll also indicate whether you have enough employee data, and whether the available data is acceptable by HMRC. When running in test mode, you'll see 'TEST ONLY' in red on most of the RTI forms, as you can see on most of the example screen images below.

The options to send an EAS, EPS, or NVR are all on the main payroll option. 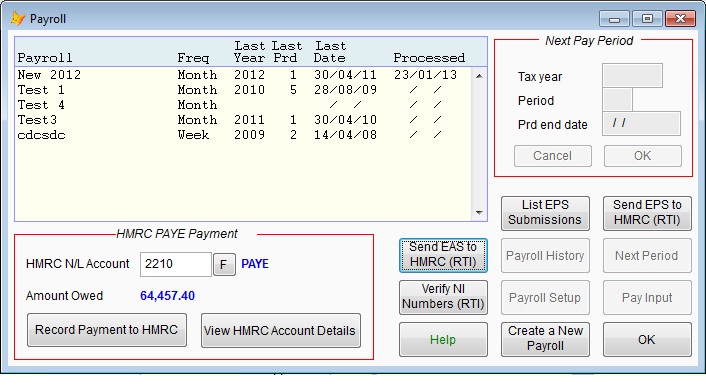 Below is the form that sends the EAS. This looks very similar to the form that sends the FPS. First thing you do is get it to check your employee details. If no problems are found, it increases the likelihood that HMRC will accept the document. If there are problems, you have the opportunity to fix them, and then try again. In the example below, it hasn't found any problems with the employee data, but it is telling us that I haven't set up any tax office information. 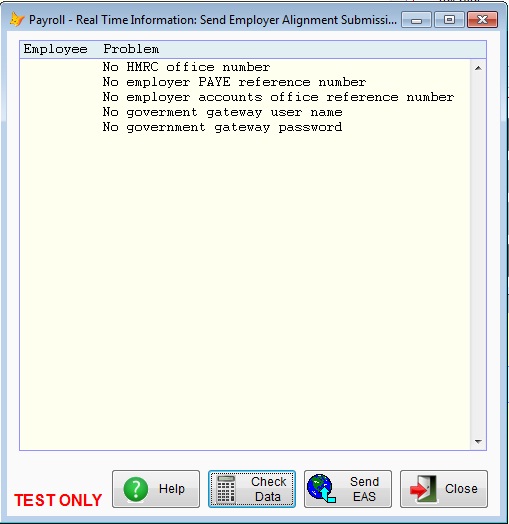 And here is the FPS. Similar to EAS, but it also contains the end of tax year declarations for the end of the tax year. The option for FPS is in the 'Pay Input' which where you select employees to enter pay details, make payments, print pay slips etc. 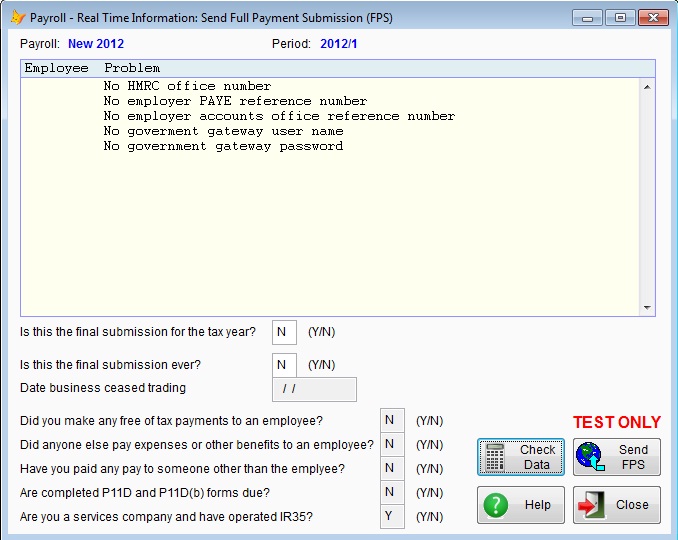 An EPS form is quite different to the FPS. As there is no individual employee information sent, there is no checking of data. It presents the options, and input fields to specify any benefits you are recovering, and like FPS, the end of tax year declarations, just in case the EPS is the last submission you will be making that tax year. Notice in the example below, it's for tax year 2014 period 1, and yet it shows some YTD figures. This is due to my hinky test data, and could not actually happen with real data. 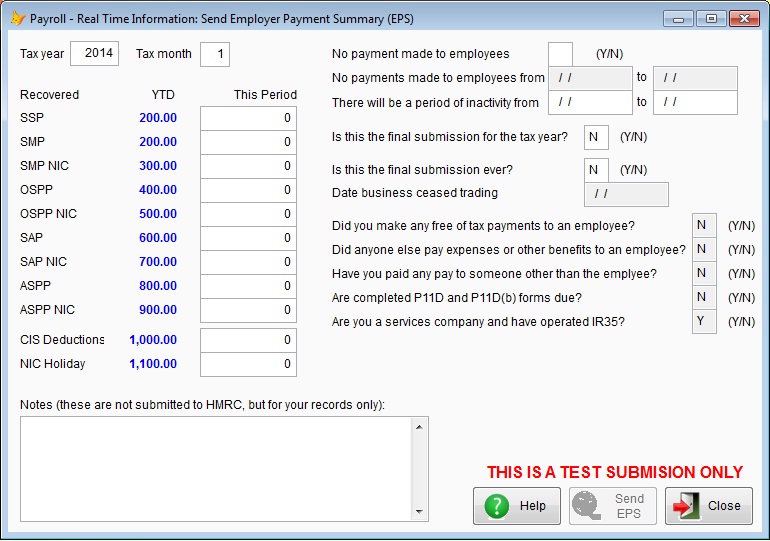 Before sending an NVR to validate or obtain a NI reference number, you must first select the employees. This form below shows you how the employees are selected: 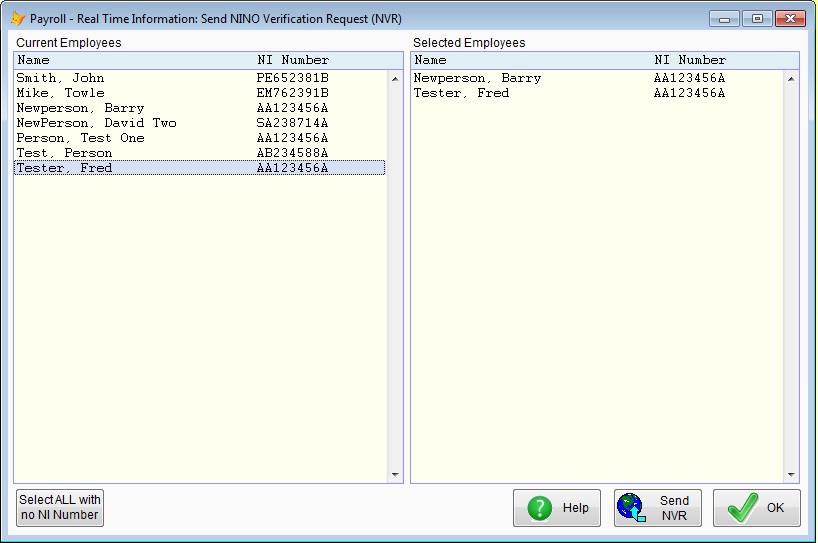 Finally, the actual process of sending one of these XML documents. This form will tell you exactly what it's doing, step by step. Usually the document is send pretty quickly, within a few seconds. Then HMRC's system will ask it to wait (usually 10 seconds) to give it time to process the information. The software will then ask HMRC's system what the current status is. Hopefully, the document was received OK, and processed without any problems. In which case the screen will look like this:

However, if there's a problem, it'll look something like this:

Error messages are available by clicking on the 'Error Messages' tab, as per example below:

You'll notice some text bleeding off the right hand side in some places. But this is not a problem as the forms are fully resizeable, so you can easily drag a form wider if necessary to see the full text.

RTI may look like a bit of a jungle when you first look at it! But actually, it's fairly straight forward, and you'll soon get into a routine. It does have the advantage in that at the end of each tax year you'll no longer be required to file P14's, P35's, or P38A's. Indeed the options to do so are no longer in the payroll. Also, there is no need to inform HMRC of new employees, as the information will be automatically sent to them via an FPS. Although, you will still need to issue a P45 to any employee that leaves, and you'll still need to print out P60's to issue to employees at the end of the tax year.

The payroll in Adminsoft Accounts is very basic. Probably about as basic as it can get. Accordingly, the implementation of RTI is also limited. It can not handle payment of pensions (as in people receiving a pension, payments into a pension fund are no problem), nor can it handle foreign employees working for you on secondment and paid by you. It also doesn't handle EYU (Earlier Year Update) which is a document submission for correcting employee data submitted in a previous tax year (I think few payrolls actually support this, unless they're expensive).

There is a free downloadable detailed user guide for the payroll, including RTI. Please check out the User Guide section on this site. 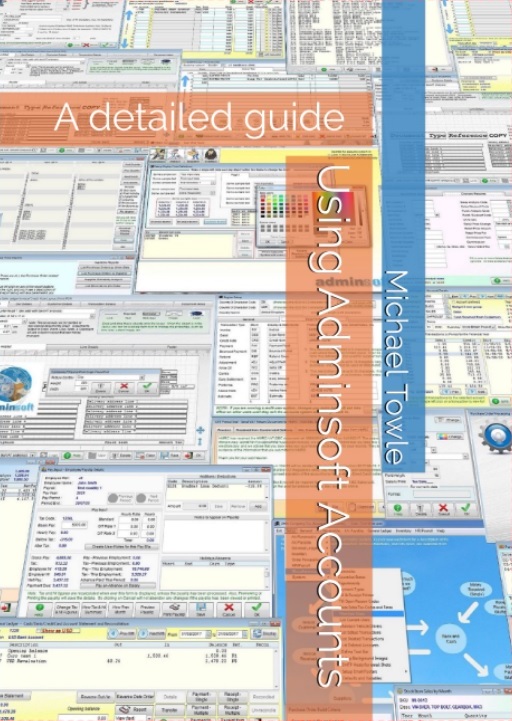 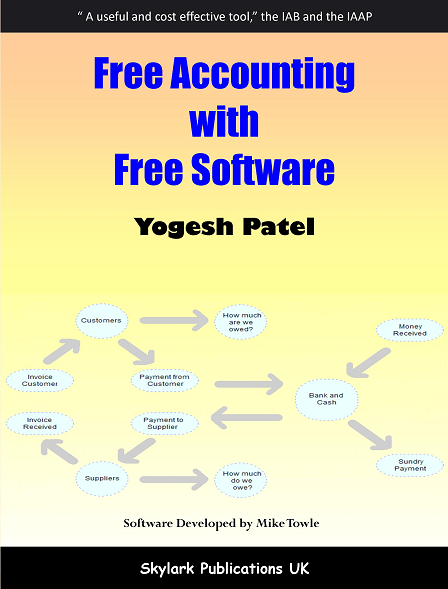 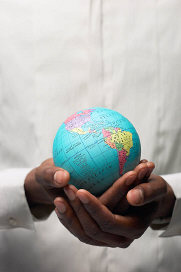